well, that didn't go so well.

a new record, out of a period before I even post a picture! well true enough but there are extenuating circumstances. I haven't really had a ton of time to paint with working about 50 hours a week and a minor rant.

For a while I was very interested in getting what ever figures caught my fancy, that is gradually changing thanks to the economies and the post offices of the world. Mostly I have been buying figures from the UK and will continue to do so from time to time. I was prepping an order for Austro Prussian figures and I realized I hit my personal limit for postage. I simply do not want to pay 20%. If you do not mind more power to you but I have reached my limit. I know there is an impact on the small business and I appreciate that. but the bottom line is the same, I do not want to pay $40 for a $200 purchase for postage from England.

So for now I will concentrate on UK lines I can order from American Retailers or American lines of figures. since I can't get this line it is going on the back burner for now. I have another Austro prussian war I am currently reading about. more on this later.
Posted by Dave at 10:54 PM No comments:

Well, alot has happened since my last post, I finished my degree at 44! moved across country with my wife and cat. (San Diego to Western New York) and started a new job as a Registered Nurse. oh and moved into our 130 year old house. So time to restart the blog.

First if anyone reads this is in the southern tier region of Western New York. let me know. I am looking for some wargaming friends. Good news is I have a painting room, also I have enough room to set up as big a battle as I can imagine, and I can imagine quite a bit.

Painting wise I have been all over the place as I usually am . But I have settled on finishing my Austro Prussian war figures for 1866. I had bought a bunch of these 2 years ago and no sooner did I have them then I heard the range was getting sold. but North Star Miniatures have bought the line and even started to expand it so I am back in.

The Austro-Prussian war has a lot for potential wargamers. While the Austrians got beat pretty handily it seems more as a consequence of vary poor leadership than any thing else. The Artillery was outstanding and while the Austrian tactics were a little dated a combined arms approach could definitely make up for it. At least that is my theory.
Second The uniforms are pretty interesting. I have always a soft spot for funky mid 19Th century look and this conflict has it in spades. Prussians in picklehaubes and Austrians
in in grey overcoats and light blue pants. cool.

Rules wise, I am going with black powder. It has pretty good flexibility which is somewhat necessary in a rules governing this period as each side utilized different tactics. The Prussians will be mounted 6 to a stand for 3 companies and 3 to a stand for 1 company. That will give me 1 company mounted for skirmishing ahead of the rest of the battalion which will be either in line or colum. The Austrians will be mounted 4 figures in 6 companies. I like the look of mounting the figures in company formations and making a reasonable go at correct battalion and brigade tactics. well that's it if anyone is still reading the blog pictures will be posted shortly.
Posted by Dave at 11:23 AM 1 comment:

I can't paint anymore Civil war. I just don't have it in me. oh well, maybe latter! Well the year proved to be somewhat good. I finished 100 Napoleonic, 40 civil war figures and Nursing school. Bonus to me. and since the new year is just around the corner time to plan next years goals. I don't think I am going to try and do more multi 100+ figure projects any time soon. My last really successful completed project was Rhodesia. So I am going to go back to a small project that can be completed in a reasonable period.
First 3 projects for the new year are as follows:
1)Korea at 100 figures per side this is the big project for the new year. more to follow on this one.
1)1980 cold war hot project that I have been working on for a while now
3) 1950 Malayan emergency project very small roughly 20-30 figures per side with a couple of vehicles. more to follow.
so with some modern themed projects on the table I will start with the first Korea.
Posted by Dave at 11:14 PM No comments: 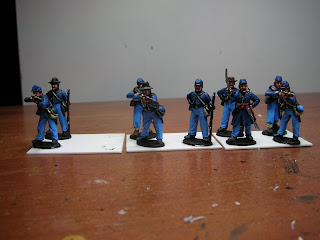 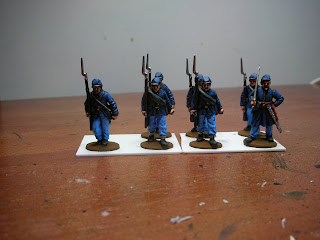 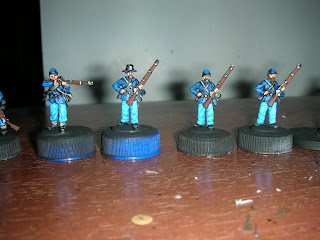 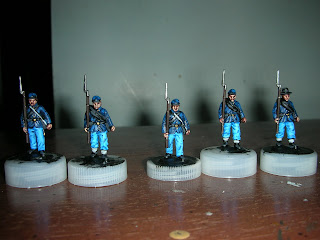 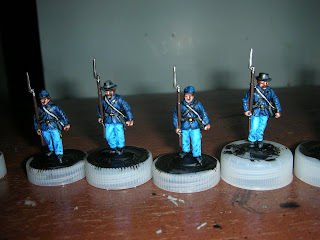 First figures are complete. 32 union figures. I have used just the sack coat figures for the advancing figures to represent the standard union uniform.
The firing figures are a mix of sack coats and shell jackets . this unit will represent a Illinois regiment with some of the troops in the state issue jacket.
I have been of a mix mind for union head gear. Generally speaking western troops are thought to use the hat more than the kepi and this appears to be borne out in photos. However since this is an early war battle I am leaning toward more kepi's to show a more smart appearance.
Interesting to see how the light effects the color of the blue . All pants are the same color and are not the turquoise blue of some of the pictures. Also all figures are 25mm perry plastics
Posted by Dave at 10:48 AM No comments:

When asked what I find appealing about war games my stock answer was always that I could recreate a historical battle and change the results. Now I know that's a little simplistic but it has always been a factor in my thinking.

But it never happens. and I mean never, In 23 years of painting miniatures it has literally never happened. when we play which is rarer these days it is always a hypothetical meeting engagement between 2 roughly matched foes. and one that only generally matches a historic order of Battle

well, it's time to change that. for my civil war project I am picking the battle of Pea Ridge AR. This is an important battle in the trans Mississippi theater and fits my criteria in most ways.
1) significant, keeps Missouri in the union and stops a confederate offensive under the general ship of Earl Van Dorn.
2) size, I can do all the forces for either wing realistically. using the frontiers scenario guide to guns at Gettysburg it is 15 union units vs 17 confederate units and that is including 5 artillery batteries.
3) interesting units, from Illinois infantry armed with colt repeating rifles to Indians to Texas cavalry there is a mix of colorful units.
I 'm going to give myself 1 year and 5 months to collect the figures and terrain and get it all painted up. so here is to playing the battle on 7 march 2012, the 150 anniversary.
Posted by Dave at 7:47 PM No comments:

A not so new period

It has been a long time since I lasted posted anything. The summer and fall have been spent finishing school. And I have not had any time to paint. Of course now that I can paint I am pretty much out of naps for the moment . So what to do ? Huzzah, a new period !

When I was a child the civil war (American) all ways had a fascination for me. I would pour over my copy of the American heritage civil war book by Bruce Catton and stare for hours at the pictures. Of course I never read it. I in fact still have that very battered book and the pictures are still pretty good and I still haven't read it. It is the one period I have danced around the edges of, painting a unit here or there but never trying to in fact paint a large force for.

Well, now is the time. I have references, I have ospreys and I have a copy of Gettysburg in the dvd player. Time to get busy.
Posted by Dave at 9:48 AM No comments: 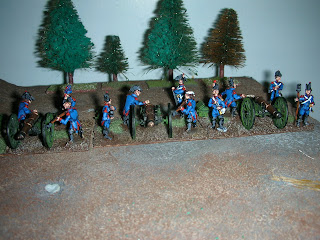 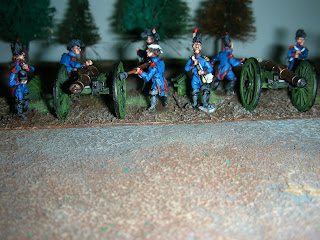 Just finished this weeks batch. 12 artillery figures and 3 12lb guns. Old Glory figures and guns. I liked the figures and they painted pretty up easy but I used really thin paint for the undercoat and keep seeing specks of silver where I missed the primer. Annoying. I think I will have to go back with a magic wash to see if I can take care of the worst of it. oh well. For GdB thats 1, 6 gun battery.
11 weeks 84 figures. I'm thinking of switching gears for a while and trying some oppostion forces. first up the Saxons
Posted by Dave at 8:22 PM No comments: